88.9k
France and Germany have signed a historic friendship treaty in Aachen. Amid Brexit, rising populism and Euroscepticism, both countries agreed to issue joint statements on key EU issues, deepen economic integration and enhance defensive cooperation. The move comes as both countries try to reassert their central positions at the heart of a European project that is coming under unprecedented pressure.

German Chancellor Angela Merkel said that the aim of the pact is a "German-French economic area with common rules" and "a common military culture" which could "contribute to the creation of a European army". Her last point has proven controversial for years and it quickly enraged nationalists and Eurosceptics in both countries and beyond. Some labeled the treaty symbolic and irrelevant while others accused both governments of signing away their national sovereignty.

The idea of an EU-army traces its origins to the period right after World War II. It did have some initial support but it was abandoned in the mid-50s. In the wake of Crimea and the Donbass conflict and amid the threat posed by a resurgent Russia, the idea has gained new impetus. It's still highly controversial in many corners of Europe, however, like in the UK where a united military service with its old Second World War adversaries would prove unacceptable in some quarters. Other EU countries have a different reason: neutrality.

That begs the question. Given that many feel the agreement in Aachen is a step towards an EU army, do countries actually support such a concept? The most recent Eurobarometer poll on the subject was conducted in 2017 with 74 percent of respondents in the Netherlands and Belgium supporting an EU army. In France and Germany, the share of in favor stood at 65 and 55 percent respectively. Elsewhere in the EU's neutral countries, support was 45 percent in Austria, 46 percent in Ireland, 42 percent in Finland, 55 percent in Malta and just 40 percent in Sweden. 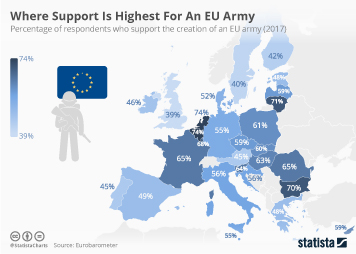 This chart shows the percentage of respondents who support the creation of an EU army (2017).

Opinions on the European Union