88.9k
On both sides of the Atlantic, pub owners, marching bands, bagpipers and revellers are gearing up to celebrate St. Patrick's Day which falls on Sunday. These days, the Irish holiday is also a big deal for the Irish diaspora in many countries around the world, particularly in the United States where many people have Irish ancestry. It's often said that the first ever St. Patrick's Day parade was held in New York City in 1763 by Irish soldiers serving in the British army. More recent research claims the first ever parade actually occurred in 1601 in Augustine, Florida. By contrast, Ireland's first state-sponsored parade was held in Dublin in 1931.

The celebrations have been criticized in recent years for being too commercialized and given that an estimated 13 million pints of Guinness are consumed on March 17th every year (enough to fill two and a half Olympic-sized swimming pools), that is somewhat understandable. The following infographic shows some key facts and spending trends behind St. Patrick's Day, particularly in the United States. Chicago is one of the best places to celebrate and its festivities kick off at noon on Saturday. The city is notable for dying the river green, a tradition that began in 1962 and involves 40 lbs of dye. The green color lasts about five hours.

The event is still hugely popular with young Americans and according to the National Retail Federation, 72 percent of those aged 18-34 plan to celebrate this year. Total U.S. spending is expected to reach $5.6 billion in 2019, a slight decrease on $5.9 billion last year with average spending expected to be just over $40. Boston is another great city for St. Patrick's Day festivities and it claims the title as the most Irish city in the country with 20.4 percent of its population reporting Irish ancestry. Given the extent of its connections with Ireland, it throws an impressive parade every year and it the South Boston Parade starts in "Southie" at 1pm on Sunday. 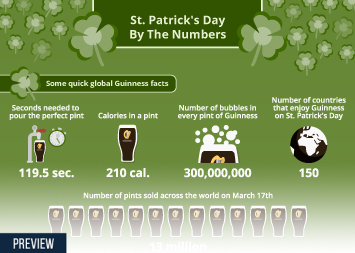