The countries that have banned products by the Chinese smartphone and wireless technology company Huawei represent more than one third of the world’s GDP, according to reporting by Bloomberg. As of December 12, 2019, Australia, New Zealand, Japan, Taiwan and the U.S. have decided to ban and phase out the company’s products within their mobile networks. Meanwhile, the UK has banned the company from contributing core parts to 5G technology, cutting Huawei's share in the country's new network to 35 percent.

After the UK's decision there is only one more member of the so-called five eyes anglophone intelligence alliance, Canada, to make up its mind about a potential ban. So far, all other members (the U.S., New Zealand, and Australia) have put total bans in place.

Germany and France, which were also mulling bans, have said they would increase security measures to safeguard against backdoors into communication channels that are feared are part of Huawei's technology. The countries have chosen not to mention Huawei in their 5G guidelines though.

Several European countries including Denmark, Sweden and the Belgium are still on the fence about possible bans. An outright ban might prove especially difficult in Europe, where Huawei is now supplying a third of telecommunication systems, up from next to none a decade ago. Dutch telecom provider KPN, for example, has excluded the Chinese company from the core of its 5G network upgrade.

Italian, Argentinian, Brazilian and Russian governments have all come forward saying that they will not attempt to limit the company's role. Despite initial worry, South Korea, The Philippines, Thailand and other Southeast Asian countries have already implemented Huawei technology for 5G networks, if in limited capacity, also making the probability of an upcoming ban quite low.

After the U.S. unveiled a high profile case against Huawei in January, which includes allegations of fraud, stealing of trade secrets and skirting U.S. sanction against Iran, many fear that the company is not independent enough from the Chinese government and might be an entryway for spying. 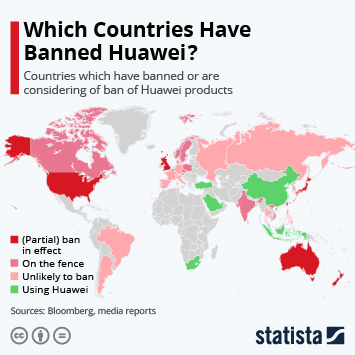 This chart shows countries that have banned Huawei products or are planning to do so (as of Aug 19, 2019).