Julian Assange, the cofounder of WikiLeaks, was arrested and forcibly removed from the Ecuadorian embassy in London, after seven years of hiding out in diplomatic and legal limbo. Over the course of nearly a decade, Assange has been charged with three central crimes by three separate governments. First, in 2010 he was accused of raping and sexually molesting two women in Sweden; second he is accused of violating bail terms in the United Kingdom; and third, and most recently, he is accused of violating the Computer Fraud and Abuse Act by the U.S. Department of Justice. The U.S. is also investigating him for espionage, the publication of sensitive government documents and coordination with Russia.

How Assange found himself in the Ecuadorian embassy began with the first accusation in Sweden, which caused Assange to leave Sweden for the United Kingdom. By the end of 2010, he turned himself into UK law enforcement and soon after he was released on bail. This set off a series of legal battles within the United Kingdom regarding whether the UK could extradite him to Sweden. Assange feared that the Swedish government would then extradite him to the U.S., where he could be charged with the WikiLeaks release of classified documents from the wars in Iraq and Afghanistan in 2010.

After many appeals, the UK Supreme Court ruled that Assange should be extradited to Sweden in 2012. Assange then sought political asylum from the Ecuadorian embassy in London, which he was granted later that same year, allowing him to stay in the embassy up until his arrest in April 2019. By 2017, the Swedish government had dropped its investigation into both the molestation and rape allegations. By the end of that year, the U.S. issued a sealed indictment for Assange charging him with conspiring to publish classified U.S. documents.

While these concrete legal battles are playing out, the public battle over Julian Assange the symbol, continues. The core of his symbolic relevance hinges on WikiLeaks 2010 publication of classified U.S. military documents from the wars in Iraq and Afghanistan. Press freedom advocates view his arrests and prosecution as an attack on investigative journalism which could set a dangerous legal precedent if he were to be tried for espionage. National security backers view Assange’s actions as a serious threat to troops and the country.

On February 24, 2020, the first week of his extradition case began at Woolwich crown court with an adjournment scheduled until May 18. As a backdrop to the court proceedings, Assange, held in the adjacent Belmarsh prison since his 2019 arrest, has experienced a significant deterioration in his health, provoking a growing group of medical doctors from around the world to issue a series of pleas. The most recent - an open letter published in The Lanceton February 17 - demanded the "end (of his) torture and medical neglect". 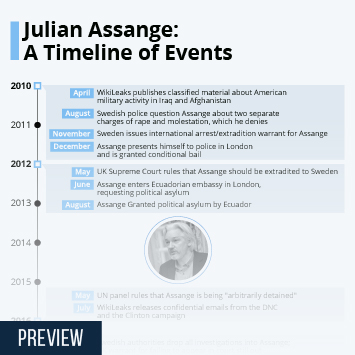 This chart shows a timeline of the major events involving Julian Assange since 2010.