88.9k
As fears continue to mount of a military clash between the U.S. and Iran, the Strait of Hormuz has swiftly become one of the most dangerous areas worldwide for commercial shipping. Two weeks ago, two tankers were allegedly attacked by the Islamic Revolutionary Guards Corps while Iran shot down a sophisticated U.S. surveillance drone on last Thursday. While tensions mounted in the Strait of Hormuz, a report about a growing threat to shipping in a different part of the world largely flew under the radar.

One Earth Future's annual State of Maritime Piracy report highlights incidents of hijacking, kidnapping, robberies and boarding attempts on the high seas. It recorded a steady decline in the number of incidents in East Africa and around Somalia in particular which was notorious for years for its high number of pirate attacks. Largely thanks to effective international naval operations, the number of piracy incidents dropped from 54 in 2017 to just nine last year. The Malacca Strait is another area with a bad reputation for pirtes and progress is also being made there. Asia experienced 199 attacks in 2015 and that fell to 98 last year.

The downward trend in those regions has helped West Africa become the world's new piracy hotspot. It saw 54 incidents in 2015, 95 in 2016, 97 in 2017 and 112 in 2018. Aside from the falling number of attacks elsewhere, there are several reasons for the increase in West Africa including poverty, political instability, a lack of proper law enforcement and a plentiful targets. Nigeria has seen the most incidents due to an increase in "petro-piracy" where vessels involved in oil and gas transportation are targeted. 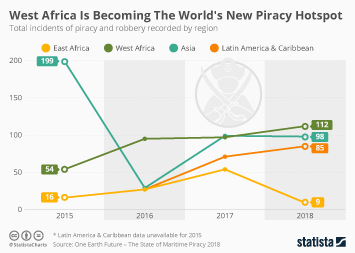 This chart shows total incidents of piracy and robbery by region.