In mid-2017, about 1.25 billion people lived in Africa, and Nigeria was the most populous nation on the continent. It is estimated that by 2050, Nigeria will be the third most populous nation in the world. Nigeria’s growing population is a result of a high fertility rate and increasing life expectancy. The country ranks 10th among the countries with the highest average birth rate for the time period between 2010 and 2015. For the past decade, the fertility rate in Nigeria has been at above 5.5 children per possible mother. For comparison, the fertility rate in the United States is less than one third of that. In addition, due to improving medical support, nutrition and living conditions, life expectancy at birth in Nigeria has increased by approximately 5 years during the same time span.
Mainly attributed to the large oil and gas reserves, Nigeria’s economy has developed rapidly and Nigeria is becoming one of the world’s largest economies. From 2001 to 2010, Nigeria had the fourth highest of GDP growth rate in the world. It is estimated that the country’s GDP will exceed 500 billion U.S. dollars by 2020, after a slump due to the decline in oil price in 2015. GDP per capita, the total output of a country divided by the number of people in that country, has also increased over the past decade. It is considered a measure of living standards, and a country with high GDP per capita is considered to have a high standard of living. Despite its increasing unemployment rates, Nigeria's trade balance helps maintain its economy. However, due to the oil price, Nigeria showed its first trade deficit in over a decade in 2016. A regional power in Africa, Nigeria’s national debt in 2017 is estimated to have been about 22 percent of GDP, ranking 17th among the countries with the lowest national debt.

Recently, Nigeria has been in the news due to violent attacks of Islamist terrorist movement Boko Haram, who have killed, injured and kidnapped thousands of civilians until today and continue to threaten the population. Boko Haram is mainly active in Northeast Nigeria, but also in bordering countries Niger and Cameroon. A clear majority of Nigerians oppose Boko Haram’s methods, and millions have fled the conflict zone already.
This text provides general information. Statista assumes no liability for the information given being complete or correct. Due to varying update cycles, statistics can display more up-to-date data than referenced in the text.

Life expectancy at birth in Nigeria 2020

Nigeria and the coronavirus 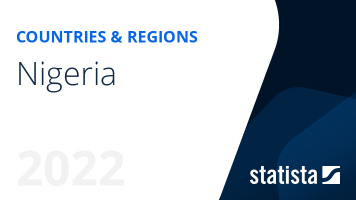 The most important key figures provide you with a compact summary of the topic of "Nigeria" and take you straight to the corresponding statistics.