The Forbidden City in Beijing, China, is by far the most visited momument - or touristic site with cultural or historical significance - in the world. In 2018, 17 million visitors flocked to the former Ming Dynasty palace, which grounds cover a sprawling 72 hectars in central Beijing. With this much space, visitors are luckily able to spread out, but still the growing number of tourists and increased interest in major sights is causing concern for some places.

Residents in cities like Paris and Barcelona, which host attractions like the Eiffel Tower (Top 7) and the Sagrada Familia (Top 12) have complained about the unsustainably high number of tourists that are taking up space in the city as well as driving up prices.

Second on the list is the Versailles Palace in Versailles close to Paris, also a spacious affair. Still, wait times of up to 1,5 hours even for ticketed visitors can occur and people are usually queuing long before the palace opens. The Taj Mahal in India is visited by almost as many people as Versailles, and recently limited visiting times to three hours per person.

"The Mall" in Washington D.C. is featured three times on the list. The space dedicated to monuments keeps tourists out of the city center and also does not charge an entrance fee. The Russian city of St. Petersburg also made the Top 15 list twice. The Peterhof Palace, actually modeled after Versailles and the Tsarskoye Selo palace museum attracted a combined 8.9 million visitors.

The list of the most visited monuments in the world was compiled by Wikipedia, taking into account the Museum Index by the Themed Entertainment Association, data by ALVA (UK), the U.S National Parks Service and national ministries of culture. 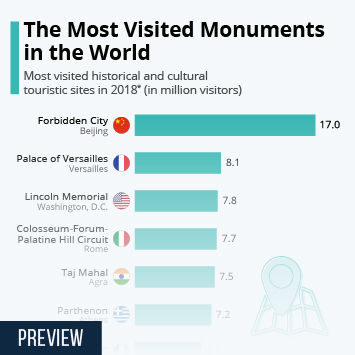 This chart shows the most visited historical and cultural monuments in the World in 2018.