Living a long life is a common wish of many – and some might just get what they wish for. Life expectancies in developed and developing countries alike have been rising continuously, causing the number of people who live to 100 years to rise also.

This year, the United Nations expect the number of centenarians to rise to approximately 573,000 worldwide.

The U.S. has the highest absolute number of centenarians in the world with 97,000 living in the country. Japan comes second with 79,000 Japanese who are 100 years or older, according to World Atlas. Japan is also where the world’s oldest person lives. Kane Tanaka from the Fukuoka prefecture is 117 years old, making her a so-called supercentenarian, which is a person living to or beyond the age of 110.

The world's oldest man, Saturnino de la Fuente of Spain, is turning 112 years old on Monday. He also hails from a country with a higher-than-average population of centenarian. In France, Spain and Italy, the share of the population who is over the age of 100 stands at around 0.03 percent - the highest in Europe.

Japan is the country with the highest rate of centenarians, at 6 for every 10,000 people or approximately 0.06 percent. Uruguay, Hong Kong and Puerto Rico are also home to some of the highest levels of centenarians compared to population with rates between 0.06 and 0.045 percent. 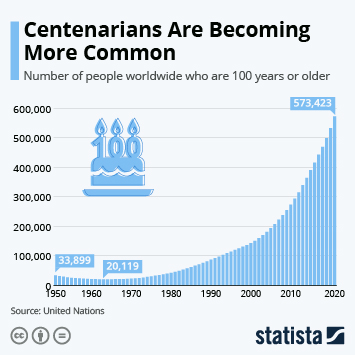 This chart shows the number of centenarians (100-year-olds and older) worldwide.