While the rates of vaping among teens has increased, Marlboro-maker Altria is losing. The tobacco giant said they would take a $4.5 billion write-down on Juul Labs, the struggling vaping company that has become trendy among teenagers. Last December, Altria purchased Juul for nearly $13 billion, acquiring a 35 percent stake in the company. Altria, one of the largest tobacco companies, had hoped to jump into the vaping market, valued at $7 billion, as smoking rates declined.

Juul has faced federal and state investigations in their marketing tactics after their product exploded in popularity among teens. Not related, there have also been lung injuries tied to vaping, which has led to government to put out warnings about vaping, though no specific cause has been identified. The U.S. Food and Drug Administration might also create restrictions on vape flavors, which is intended to control its allure to young consumers. 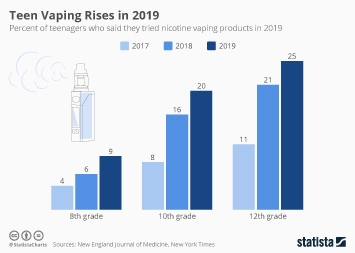 This chart shows the percent of teenagers who said they tried nicotine vaping products in 2019.