Less than three months after officially recording its first COVID-19 death, the United States passed a grim milestone on Wednesday. According to the Johns Hopkins University, the official coronavirus death toll stood at 100,442 as of May 28, 1:30 AM EDT, making the U.S. the worst affected country by far.

Not only has the coronavirus pandemic now taken more lives than every armed conflict the U.S. has been part of since the Korean War, it’s also on track to become the deadliest public health crisis since the 1918 influenza pandemic (Spanish Flu), which killed 675,000 people in the United States and at least 50 million worldwide.

Considering the difficulties involved in accurately tracking an outbreak of this scale, public health experts say that the official tally is probably an undercount, meaning that the real death toll of the novel coronavirus may be even higher than reported. On a positive note, the daily death toll appears to have peaked in late April and has been on a downward slope ever since, averaging just under 1,000 new deaths for the seven days ended May 27, compared to a peak of 2,200 for the seven days ended April 18. 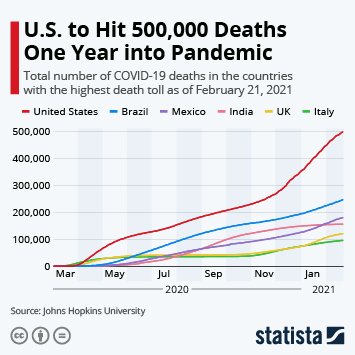 This chart shows cumulative COVID-19 deaths for the worst affected countries as of May 28, 2020.