Security concerns and reports of possibly problematic ties to Chinese authorities notwithstanding, Zoom Video Communications has been a major beneficiary of the changes brought about by the COVID-19 pandemic. As much of the world has been working from home and relying on technology to stay in touch with colleagues and loved ones amid national lockdowns, video conferencing apps saw an unprecedented surge in usage, with Zoom one of the most popular options available.

"Work is no longer a place, it’s a space where Zoom serves to empower your teams to connect and bring their best ideas to life," Eric S. Yuan, Founder and Chief Executive Officer of Zoom said in the company's earnings release on Wednesday. "We are energized to help lead the evolution to hybrid work that allows greater flexibility, productivity, and happiness to both in-person and virtual connections." For the three months ended January 31, Zoom posted yet another revenue record, subsequently raising its revenue guidance for fiscal 2022 to between $3.975 billion and $3.990 billion.

As the following chart shows, Zoom saw its revenue skyrocket throughout the fiscal year ended January 31, 2021. Following a 169-percent revenue increase in the first quarter, year-over-year revenue growth accelerated to 355, 367 and 369 percent, respectively, in the second, third and fourth quarter. For the twelve months ended January 31, Zoom's revenue amounted to $2.65 billion, up from just $623 million the previous year. The video conferencing company ended the year with a net profit of $671 million, up from just $22 million in fiscal 2020. As of June 2, Zoom had a market capitalization of $96 billion, compared to $40 billion a year earlier. 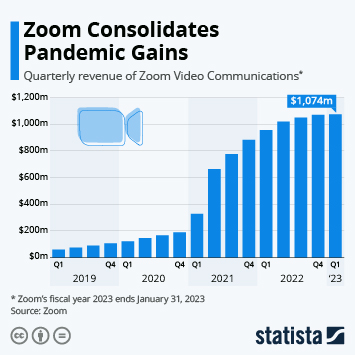