Retail may be the hardest-hit industry from COVID-19 restrictions, with decades-old companies laying off thousands and applying for crippling bankruptcies. Other industries, like office software tools, are thriving. Earnings reports from a mix of these industries will be released next week, giving an insight into how they’re coping with the pandemic and where we can expect them to go as the world tries to reopen.

Notable retail, software and publishing companies will be releasing quarterly earnings reports during the week of May 31. J.C. Penney and Gap are the most noteworthy in retail, while Slack and Zoom have been making headlines in office software for their astronomical rise in new users. Tribune Publishing – a large player in local news across the U.S. – will also be sharing their quarterly earnings report.

On May 15, J.C. Penney declared bankruptcy, and has been forced to close hundreds of stores and lay off thousands of employees since the beginning of COVID-19 restrictions. Their stock price as of May 28 has reflected that – down over 70 percent since their last quarterly report at the beginning of March. At the beginning of May, Gap reported layoffs of 10 percent of their workforce along with a closing of most of their 3,300 stores.

On the flip side, Zoom and Slack have reported increases of millions of users on each of their platforms since March. In April, Zoom falsely reported a growth of over 300 million daily users – a report which was retracted quickly but clarified that their numbers are still much higher than normal. Slack has seen big surges in daily concurrent users on their platform, and their stock price since last earnings has reflected that.

Tribune Publishing, which publishes local newspapers like the Chicago Tribune, The Baltimore Sun, Hartford Courant and others across the country, will offer a snapshot into how local media is handling COVID-19 restrictions. Across the board, media companies have seen surges in viewership as it relates to COVID-19 news. However, an over-saturation of pandemic content may be causing many to tune out. Tribune Publishing stock is down 11 percent since their earnings report in early March. 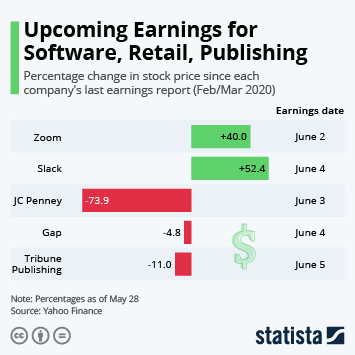 This chart shows the percentage change in stock price since each company's last earnings report from February/March 2020.