The EU and Schengen area countries have announced a major addition to the list of countries which are allowed to enter the bloc amid the COVID-19 pandemic. The ban on nonessential travel from the United States, Hong Kong, Macau, Taiwan, Albania, Serbia and North Macedonia will lift on Friday. Travelers might still have to undergo testing and/or quarantine.

The first release on July 1, 2020, included ten countries, but the list has changed several times since then. Most recently, only eight countries were named. Since the start of the list, China has remaining a possible new entry if it in turn decided to open up to travelers from the EU as well. The U.S. will appear on the list for the first time with the new edition. Canada, which was removed in October 2020, is not expected to be reappear just yet.

The EU criteria for the green light on travel are that countries have had new case counts of below 75 per 100,000 inhabitants for the last 14 days and that the case counts continued to follow a downwards trend. Also, the countries’ COVID-19 response has to be rated as solid and the case counting as reliable in the eyes of the EU.

Essential travel, for example by medical personnel, and travel by EU citizens and long-term residents is exempt from the rules, which apply to all 27 EU members, Schengen area countries Iceland, Norway, Switzerland and Liechtenstein as well as de-facto Schengen states Andorra, San Marino, Vatican and Monaco. 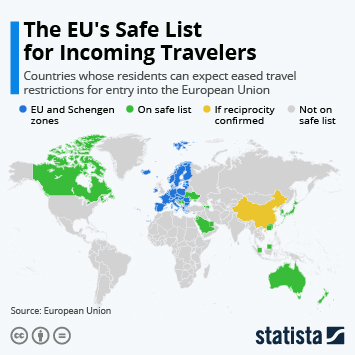 This chart shows countries from where it is allowed to enter the EU and Schengen areas amid the COVID-19 pandemic (as of June 18, 2020).