A new YouGov poll shows Michelle Obama and former President Barack Obama are the two most-admired people in the world.

Trump came in 15th place on the global admiration scale. According to YouGov, the current president trailed the former president in admiration for nearly every country measured except for one: Russia, where Trump ranked 11th and Obama ranked 15th.

In the battle between whether Cristiano Ronaldo or Lionel Messi is the greatest of all-time in the world’s most popular sport, Ronaldo came in 6th on the global admiration scale while Messi came in 11th. 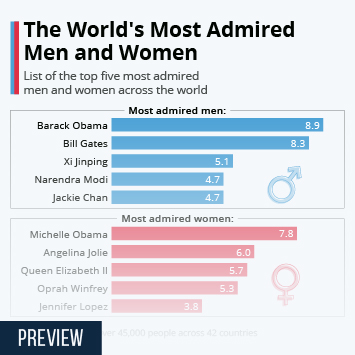 This chart shows the list of the top five most admired men and women across the world in 2020.