In early 2021, COVID-19 lockdowns remain in place across Europe, but a number of countries has started to gradually ease restrictions. Previously, the reluctance of many nations to go into a full-fledged lockdown had created a hodgepodge of restrictions just short of the real deal.

Despite continuing closures of non-essential shops and restaurants, schools have started to open in Germany, the UK, the Netherlands and Denmark, among others. Outdoors sports facilities, museums, zoos and hairdresser are typical types of places which have reopened or are about the reopen in locked-down European countries. Shopping at a store after making an appointment is also being introduced in several places. Switzerland has announced tentative plans for outdoor dining to open with restrictions in place, but officials have stressed that this is tied to falling infection numbers. Germany had announced a similar plan, but after restrictions were once again tightened, outdoor restaurant visits won't be a reality soon for most Germans.

Switzerland, as well as Austria, have significantly eased restrictions recently, opening shops and other businesses but leaving restaurants shut. In Austria, where a curfew remains in place, the opening up has been accompanied with strict local lockdowns confining the residents of several towns. Other European countries which have come out of lockdowns since late January are Poland and Bulgaria, but Poland had to impose major restrictions again after case numbers surged once more

France has ended its second national lockdown and switched to an early national curfew supplemented by restaurant closures and - most recently - local lockdowns, like the one implemented in Paris. Curfews instead of lockdowns are currently also applied Luxembourg and Belgium. Spain has stuck to its national curfew and localized lockdown system stubbornly despite case numbers rising swiftly again in what has been called a third wave of infections. Despite the Spanish regions retaining the power to lock down citizens, none except for Ibiza are currently imposing any restrictions resembling a local lockdown. Italy is still enforcing a nationwide curfew and localized restrictions, while adding early restaurant closures and a national Easter lockdown into the mix.

Curfews on top of national lockdowns are still in place in heavily affected Central Europe as well as in the Netherlands and Slovenia. Some more creative solutions have come out of Cyprus and Greece, where the frequency of shopping trips has been restricted majorly with the help text message codes. Other than Denmark, Scandinavian countries have not imposed major restrictions, a closure of restaurants in several Finish regions being the most comprehensive measure at the moment. Norway, for example, allows indoor gatherings of up to 200 people, but only if distancing measures are adhered to and chairs are bolted to the ground for extra safety. In locked-down Slovakia, a valid reason to leave your home is - like elsewhere - to walk your dog and - surprisingly - also to walk your cat.

As in previous lockdowns, levels of enforcement vary significantly between countries. 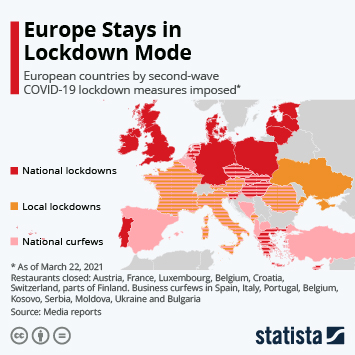 This chart shows coronavirus restrictions imposed in Europe during the second wave of the coronavirus pandemic (as of March 12, 2021).