Border apprehensions across the U.S. southwest border declined significantly during the fiscal year of 2020. According to Pew Research Center, total apprehensions were cut in half from 2019 to 2020, going from 851,000 to 401,000. New data shows how 2019 was a relative anomaly in terms of U.S. border enforcement, particularly in terms of the types of people being arrested while attempting to cross into the country.

Data going back to 2013 shows a similar pattern to 2020, with single adults greatly outnumbering families and children arrested at the southwest border. The only outlier to this trend is 2019, where there was a considerable jump in family apprehensions by border patrol officers. A large 56 percent of all arrests were of family units, with just 35 percent being single adults.

The data suggests the U.S. Border Patrol initiated a campaign in 2019 to more strictly enforce the border and make arrests. However, with the swift appearance of COVID-19 lockdowns across the country, a focus on border security and apprehensions took a marked decline. Other reasons for the quick rise and fall in border arrests, according to Pew, is evidence suggesting seasonal migration patterns for those crossing into the U.S. have changed in the past five years. While data has shown border apprehensions typically increase in spring, recent data shows arrests increasing at different times of the year – the peak in fiscal year 2020 being in September. 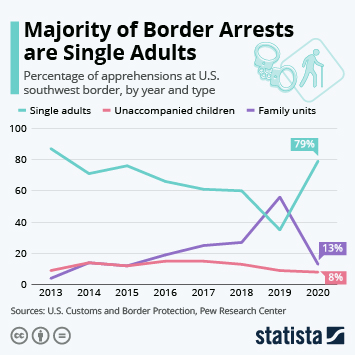 This chart shows the percentage of apprehensions at the U.S. southwest border, by year and type.