The coronavirus pandemic has upended the working lives of millions of Americans in 2020. Countless jobs have been lost, and many who’ve been able to retain a job have seen hours shifted significantly and roles evolve. New data shows how work-sharing in the U.S. has risen substantially due to COVID-19.

In data collected by the U.S. Department of Labor, work-sharing claims in the U.S. hit a record peak of over 1.7 million in July before tapering off to around 870,000 in October. Still, those numbers are enormous compared to the beginning of the year, when work-sharing claims averaged just around 59,000 for each of the first three months.

According to the Economic Policy Institute, while rare in the U.S., work-sharing is much more common in countries like Belgium, Turkey, Italy and Germany, where employees’ hours are reduced to part-time status while they also receive partial unemployment insurance benefits. For example, instead of laying off 10 employees, a company could cut in half the hours of 20 employees; this would allow the company to make up the same lost wages while allowing the employees to collect partial unemployment insurance provided by the government.

States like Washington, Rhode Island, Oregon, Kansas and Missouri have had the largest percentage of continued work-sharing claims in 2020. Many local and state legislators and activists are encouraging the expansion of work-sharing during the pandemic, as it would allow many to keep their jobs while giving businesses the wage relief that many desperately need. 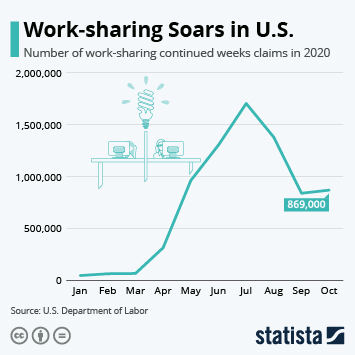 This chart shows the number of continued work-sharing claims made in the U.S. in 2020.