Global warming has led to 2020 being tied with 2016 as the hottest year ever recorded by scientists, according to a new report from the National Oceanic and Atmospheric Administration. The report shows data that has become quite common over the last decades, with temperatures inching up higher and higher from the 20th century average. A look into the data of temperature increases over the last decade shows the rate of increase appears to be rising.

According to data collected by Bloomberg from the NOAA, the global temperature average has increased by 0.82 degrees Celsius when compared to the 20th century average. The rate of increase, however, increased to roughly 0.18 degrees Celsius each decade since 1981, signaling a quickening of both warming surface and ocean temperatures across the globe. Overall, 2020 and 2016 were around 1.2 degrees Celsius hotter than the average temperature during the 19th century, with 2019 coming very close. While scientists predict 2021 to be another top 10 hottest year, the enormous weather pattern La Niña in the Pacific Ocean is expected to bring cooler temperatures than previous years.

Miniscule changes in global temperature are, and will continue to have, drastic consequences related to weather events and patterns. Wildfires, hurricanes, floods and droughts are some of the most common, and have already seen a noticeable uptick in occurrences over the last few decades. According to Bloomberg, scientists’ confidence in the direct relationship between catastrophic weather events and rising global temperatures continues to rise each year.

Ultimately, decades-old models from climate scientists across the world have been relatively accurate with how temperatures would increase by 2020. Carbon dioxide pollution has been one of the largest drivers of this rise, many scientists say, and even a swift cutback on emissions may prove ineffective in completely halting the rapid temperature increases. 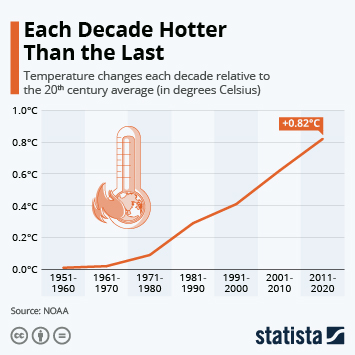 This chart shows the temperature changes each decade relative to the 20th century average (in degrees Celsius).