On today’s World Hijab Day, rules and laws regulating women’s religious head coverings are applied in at least 60 countries worldwide. The rules collected by Pew Research Center include those mandating headscarves as well as those forbidding certain head coverings.

Most rules are actually applied in European countries. As of 2018, France, Belgium, Austria, Denmark and Bulgaria had national bans for face coverings – often part of burkas or niqabs – in place. France also bans hijabs in public schools. More regional and situational bans for face covers exist in Europe – including in Turkey. In the secular Muslim country, a battle about banning hijabs in certain institutions has also been raging on for years. Before the Arab Spring, the situation was similar for wearers of the hijab in Tunisia.

The same report by Pew also found that women in European countries were most likely to experience hostility over breaking dress norms - mostly for not dressing secular.

Some Muslim-majority countries are also among those banning covered faces in general, for example Morocco, Tajikistan and Chad. Others have some laws and rules mandating head scarfs in general or in certain situations on their books. The most prominent example of this is Iran, where a loose-fitting head scarf remains mandatory in public. While it is still expected, headscarves in public are actually not the law in Saudi Arabia, while the abaya, a long-sleeved over-garmet, is. Despite the lack of laws in place in some locations, headscarves are common in many Muslim-majority countries in Africa, the Middle East and Asia, but might not be worn by all women. 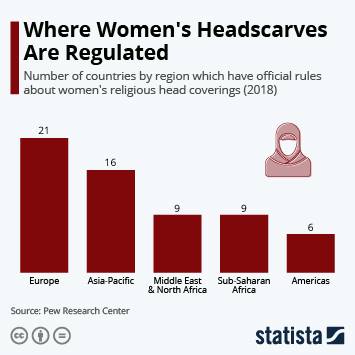 This chart shows the number of countries by continent which apply rules about women's religious head coverings (2018).