88.9k
Apple reported earnings for the June quarter, the third quarter of the company’s fiscal year, on Tuesday. After two consecutive quarters of declining revenues, Apple returned to growth at last, beating Wall Street expectations in terms of revenue, earnings and its guidance for the ongoing quarter.

While revenue grew modestly to $53.01 billion, mainly thanks to strong services and wearables revenues partly offsetting a slump in iPhone sales, Apple’s profit dropped by more than 12 percent to $10.04 billion in the three months ended June 29. The latter was partly caused by a sharp increase in research and development spending as Apple apparently ramps up its efforts to find the next big thing.

In the past three months, Apple spent $4.26 billion, or 7.9 percent of total sales, on research and development, bringing R&D intensity to levels last seen in the early 2000s. For the first nine months of the company’s fiscal 2019, Apple devoted 6.2 percent of sales to R&D, the highest its been since 2003, when the iPhone was still a distant dream. “It obviously is very important for us to continue to invest in the business, particularly on the R&D side”, Luca Maestri, Apple’s CFO said during the earnings call, adding that “we will always want to bring more innovation into the market, we want to improve the user experience, and differentiate our products and services in the marketplace, so we will continue to do that”. 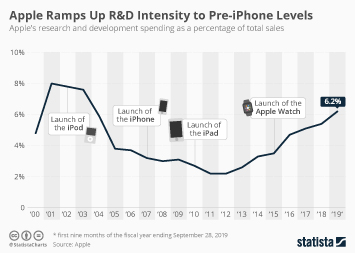 This chart shows how much money Apple spends on research and development relative to its revenue.

Innovation in the Automobile Industry