A recent report by Deloitte shows that South Asian countries are the least prepared in the APAC region for the upcoming challenges of workplace automation.

India scored only 44 percent out of 100 percent in the ranking that considered innovation potential, business environment, workers' education levels and social safety nets. Bangladesh and Pakistan scored even lower at 41 percent and 40 percent, respectively. The latter two countries were named most at risk for the challenges of automation in agriculture, mining, construction, logistics and manufacturing. Like India, Bangladesh and Pakistan have a high level of employment in these sectors which are likely to face severe disruptions due to automation in the future. The report also states that 60 percent of Bangladeshi garment workers could become unemployed by 2030 due to automation.

Employment in sectors more insulated from automation, like education, administration or finance, remains low in South Asia. Since the report also considered workers’ ability to upskill or be compensated if they lost their job, South Asian countries lost even more points.

Australia and Singapore unsurprisingly were best set up for the automated future. Despite getting good marks from the report in terms of progress of automation and worker training, Japan and South Korea scored somewhat lower at 69 percent and 66 percent preparedness. Especially Korea lost points on the social aspects of aiding workers affected in the transition.

The Philippines scored 56 percent, behind Thailand, but ahead of Indonesia and Vietnam. According to the report, existing corporate training programs and the willingness to re-skill were giving the country an edge, while high employment in agriculture, low R&D spending and low rates of internet users were making it vulnerable to the negative effects of workplace automation. Deloitte also pointed out that the minimum time it takes to register a business in the Philippines was stifling innovation. At 33 days, starting a business took the longest in the country out of all twelve nations surveyed. 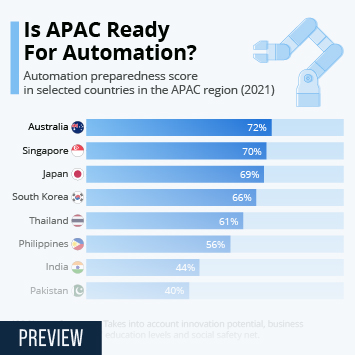 This chart shows the automation preparedness score in selected countries in the APAC region (2021).