After the resignation of New York governor Andrew Cuomo following a sexual harassment scandal, lieutenant governor Kathy Hochul will be serving as the first female in the state’s top position. This makes the state the 31st in the nation to have had a female governor, leaving almost 40 percent of states which have never had a woman at the helm.

Whether states have had a female governor does not follow red and blue state designations, even though 60 percent of female U.S. governors have been Democrats. Arizona has had the highest number of female governors – four. While three took office, similar to Hochul, following the resignation of another governor at least initially, future secretary of Homeland Security Janet Napolitano was directly elected to the office in 2003.

Out of the 44 women listed by Rutgers University as having served as governors, at least 13 took over when others, in most cases men, left their office ahead of schedule, with the new female governors either finishing their terms or serving as intermediaries (some only for short periods of time).

From the 1920s until the 1960s, women being elected as successors for their husbands after they died, were impeached or maxed out their term limit produced the first female U.S. governors in the states of Wyoming, Texas and Alabama. The first independently elected female governor followed in 1975, when U.S. Representative Ella Grasso won the Connecticut gubernatorial race. More elections of female governors took place in Washington state in 1977, when biology professor and former chairman of the Atomic Energy Commission, Dixy Lee Ray, took over, and in 1984 in Kentucky with the election of former schoolteacher and elected court clerk Martha Layne Collins. The first female Republican governor was elected in 1987 in Nebraska, when state treasurer Kay Orr beat another woman, Democratic candidate Helen Boosalis. 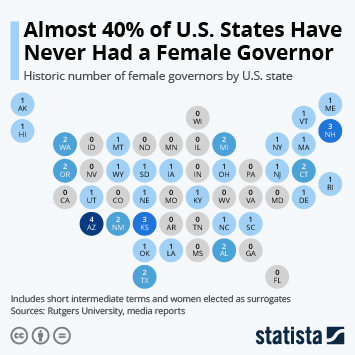 This chart shows the historic number of female governors by U.S. state.