Out of the 135 countries pledging carbon neutrality, only 66 have put a target year on their policies, laws or propositions according to data by Net Zero Tracker. Even though this number is still comparatively low, some major players like Saudi Arabia joined the number of countries vowing to put into motion plans to combat climate change in connection to the COP26 climate summit which wrapped up November 12. While the majority of the 66 nations could in theory be held accountable due to their goals being enshrined in laws or policies, it's still a long way to go to truly reach carbon neutrality as our chart indicates.

Leading the road to net zero among bigger nations is Finland, which aims to become carbon neutral by 2035 via its medium-term climate change policy plan and national climate and energy strategy put into place in June of 2019. In Europe, Iceland and Austria are looking to reach net zero by 2040, with Germany and Sweden pushing the date for carbon neutrality to 2045. Most of the countries with climate pledges have put down 2050 as their goal, with the exception of China, Saudi Arabia, Sri Lanka, Ukraine, Nigeria, Brazil, Bahrain and Russia targeting 2060. India, responsible for seven percent of greenhouse gas emissions worldwide, has the questionable honor to lead this ranking with 2070 as its target. These exceptions might prove detrimental to the fight against climate change though, since China and Russia, for example, were among were among the top 5 countries by CO2 emissions in 2019, with China emitting ten billion metric tons against the United States' five billion metric tons.

While Suriname and Bhutan were the only two countries that had already achieved net zero and were even looking at a net-negative carbon economy for some time, the number of countries presenting similar results has risen since the conclusion of COP26. Now, Benin, Gabon, Guinea-Bissau, Guyana, Cambodia, Liberia and Madagascar are also part of this small club. The prevalence of smaller states in this group can be attributed to the relatively undeveloped nature of some of those places as well as in some cases the dense forest cover, which makes up 93 percent of the total area of Suriname, for example.

While the reduction of greenhouse gas emissions is a key part of the net zero concept and combating climate change, it's not its only relevant indicator. Artificial or natural carbon sinks like rainforests are also an important factor in reaching this goal since the reduction to zero carbon emissions is downright impossible to achieve. Therefore, carbon neutrality must be understood as a holistic concept, including developing technology to draw greenhouse gases from the atmosphere, furthering conservationist measures concerning important natural habitats, as well as reducing the overall output of carbon caused by industrialized production. 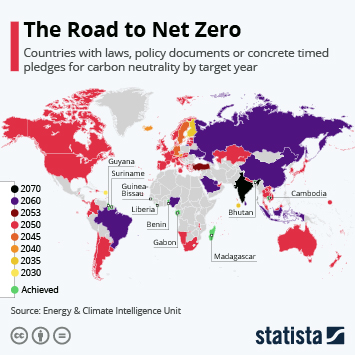 This chart shows the countries with laws, policy documents or timed pledges for carbon neutrality.