Speaking to reporters before her return from the Munich Security Conference on Sunday, U.S. Vice President Kamala Harris cited rising energy costs as a potential immediate consequence for Americans of the confrontation between Russia and Western powers over Ukraine. With Russia being a major energy supplier, sanctions against the country would likely affect energy prices in Europe, the United States and around the world. The prospect of even higher energy costs is sure to dismay many Americans, as prices have already risen quite a bit in the current pandemic-induced high-inflation environment.

"When America stands for principles, and all of the things that we hold dear, it requires sometimes for us to put ourselves out there in a way that maybe we will incur some cost," Harris was quoted as saying, before adding: “In this situation, that may relate to energy costs.”

Numbers by the Bureau of Labor Statistics show the price increase of different types of energy in the U.S. over the past two years. Gasoline has proven the most volatile over the pandemic period, reaching a low of $1.95 per gallon in April 2020 before hitting $3.50 most recently. Natural gas, which is one of the major energy exports of Russia to Europe, cost just over $1.00 in early 2020 for one therm, the approximate average daily consumption of a U.S. household in a warmer climate. The same amount of natural gas was around 35 percent more expensive in Jan 2022, while the average daily electricity use in the U.S. was about 10 percent pricier.

While further price increases could hit the U.S. in the case of an escalation over Ukraine, the biggest energy price increases – or even shortages – would be shouldered by countries in Northern and Eastern Europe, which depend heavily on Russian gas supply, for example Finland, Bulgaria or North Macedonia. 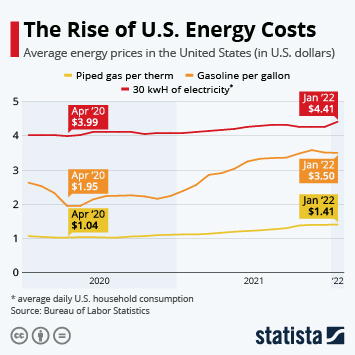 This chart shows average energy prices in the United States (in U.S. dollars).