Russian billionaires have seen their fortunes dwindle in a major way since the country started its invasion of Ukraine on February 24. On March 3, the net worth of the Russian ultra-rich listed on the Bloomberg Billionaires Index was a combined $88 billion lower than it had been on February 23. A closer look at some Russian billionaires shows that the losses amount to significant chunks of the personal fortunes of these individuals who are often labeled as oligarchs.

Lukoil president Vagit Alekperov was arguably the biggest loser, shedding more than 60 percent of his personal fortune before dropping off the Bloomberg list on March 2 together with four other previously listed Russian billionaires. The lead-up to the Russia-Ukraine war as well as the aftermath of the Omicron coronavirus wave had depressed markets previous to February 24, but Russian billionaires sustained the majority of their losses on or after that date. While the fortunes of international billionaires fluctuated somewhat in early 2022, the Russian stock market dive and the selloff of Russian assets in international markets upon the invasion caused these astronomical losses for Russian billionaires.

Lukoil, which is listed in London, tanked more than 80 percent. Russia’s richest man, Vladimir Potanin, saw stocks of his company Norilsk Nickel – also listed in London - sink by more than 50 percent, resulting in a loss of $4.5 billion of his fortune between February 23 and March 3. Even higher losses were sustained by Alexey Mordashov, who in addition to dealing in steel and gold holds a stake in German travel company Tui, as well as Gennady Timchenko of Volga Group, who controls interests in natural gas and chemicals. Prominent Russian billionaire Roman Abramovich, known for his outsized yacht and ownership of English Premier League club Chelsea F.C., lost around 2 billion or 12 percent of his fortune since February 23.

Gennady Timchenko and Mikhail Fridman of investor Alfa-Group appeared on the sanction list of the UK and the EU, respectively.

As the fortunes of billionaires in Russia and elsewhere are unrealized gains tied to stock markets, losses like these can be temporary unless stakes are sold. 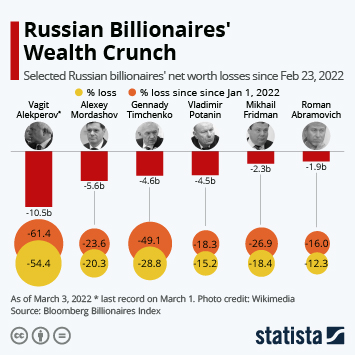