Amazon is suing more than 10,000 administrators of Facebook groups over fake Amazon reviews. According to the BBC, the e-commerce giant is tightening restrictions on fraudulent reviews left on Amazon marketplaces in the U.S., UK, Germany, France, Italy, Spain and Japan.

Such product ratings are used by online shoppers to help them hone in on where to spend their money, as shown by data from the Statista Global Consumer Survey. For example, half of all UK respondents said they find such reviews helpful. The Swiss are slightly more skeptical, however, when (alleged) buyers give stars, with only 40 percent of respondents saying that they found them useful.

So how do bogus reviews work? First, people join Facebook groups where they are asked to buy products and to leave a positive Amazon review. Once posted, they are reimbursed by the group for the purchase and paid for having left the review. While this sounds like an expensive business model, a high quantity of positive reviews can greatly improve the seller’s visibility on Amazon, moving them up the search results ranking, which can greatly improve profits. In fact, according to analysis by e-commerce consultant Pattern, when the average star rating on an Amazon listing goes up by a star, it can boost sales by a further 26 percent. Fake reviews make it harder for consumers to know which products are genuinely worth buying. 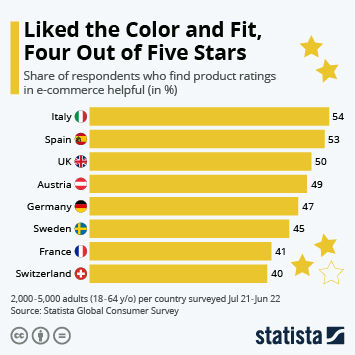 This chart shows the share of respondents who find product ratings in e-commerce helpful.