Which countries go easy on the climate and have also acted to combat climate change? The Climate Change Performance Index by the NGO Germanwatch, the NewClimate Institute and the Climate Action Network tracks the climate protection performance of 59 countries and the EU, which together are responsible for 92 percent of global greenhouse gas emissions.

The latest edition of the study warns that no country is on track to limit global warming on Earth to 1.5°C, hence no nation was awarded the classification of “very high” performance. Keeping this in mind, Denmark, Sweden and Chile were the countries faring the best in the “high” performance category, followed by Morocco and India.

The latter country on the whole is one of the biggest polluters in the world, but as the index is based on per-capita numbers for energy use and greenhouse gas emissions, it performs well. Furthermore, India’s climate change policy received the fifth-highest rating in the index, even though this is still rated as a “medium” performance against the 1.5° goal. Concerning renewable energy use, trend and target, India’s performance is also rated as “medium”. According to the report, the country was on track to meet its 2030 emission goals, but not its 2030 renewable energy targets.

Iran, Saudi Arabia and Kazakhstan, on the other hand, are the bottom three countries in the comparison. Iran is one of the few countries in the world that has not yet ratified the Paris Agreement and is also among the 20 nations with the largest, currently exploited oil and gas reserves in the world.

China and the United States, also among the largest emitters in the world, perform poorly on a per-capita basis. The United States also loses points for its renewable energy use, while China disappoints on climate change policy. The country fell 13 ranks compared with last year’s release and its development of coal and renewable power in tandem as well as its less-than-concrete emission goals beyond 2030 are point of contention for the makers of the index. 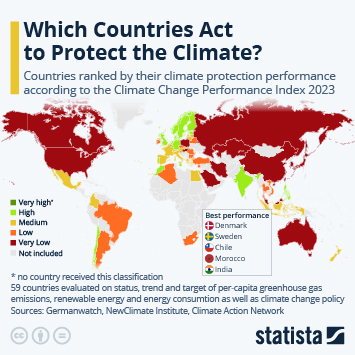 This chart shows countries ranked by their climate protection performance according to the Climate Change Performance Index 2023.