53k
74.6k
87k
88.9k
When Twitter announced its third quarter results last week, the biggest news of the day weren’t to be found in their earnings report. It was what Twitter had to say besides the usual numbers that caught people’s attention: Not only did the company confirm another round of layoffs that will see its staff reduced by roughly 9 percent, but it also announced that Vine, the video-sharing app Twitter had acquired in 2012 and launched in early 2013, will be shut down in the coming months. Both measures are part of a restructuring process that is aimed to allow Twitter to “fully fund our highest priorities, while eliminating investment in non-core areas and driving greater efficiency”, and ultimately improve profitability.

Even though things have gotten quiet around Vine in recent months, the announcement to can it altogether came as a surprise. After its launch in 2013, the service that lets its users create and share 6-second looped videos, had quickly gained popularity among young creatives. Not unlike its parent company Twitter, Vine had failed to become a mainstream hit though, and ultimately the competition from the likes of Instagram and Snapchat proved too strong.

As our chart illustrates, we could have seen the end of Vine coming for a while. According to an analysis by Markerly published earlier this year, even Vine’s most popular users, those with more than 10,000 followers, had started turning their back on the service prior to this year. Less than half of Vine’s most influential users posted a video in 2016. The majority of influencers, celebrities and brands had already moved on to the next big thing – a clear sign of a platform’s imminent decline. 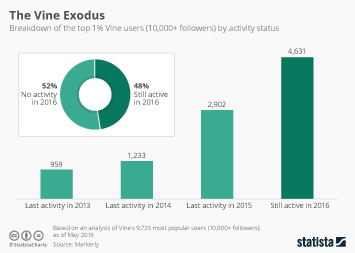