Considering that a large percentage of the highly-skilled immigrants working in the U.S. under the H-1B visa program work in computer-related occupations, it doesn’t come as a surprise that numerous tech companies pushed back against Monday’s executive order, banning foreign workers from entering the United States on nonimmigrant visas until the end of the year.

Several officials from Silicon Valley and beyond voiced their disapproval of the executive order on Monday, warning that the proclamation could end up hurting the ailing economy rather than helping a quick recovery. “Immigration has contributed immensely to America’s economic success, making it a global leader in tech,” Google CEO Sundar Pichai said as he voiced his disappointment on Twitter, adding that his company would “continue to stand with immigrants and work to expand opportunity for all.”

"This proclamation undermines America’s greatest economic asset: its diversity,” Twitter’s VP of Public Policy and Philanthropy Jessica Herrera-Flanigan said in an official company statement, while Microsoft President Brad Smith pointed out that “now is not the time to cut our nation off from the world’s talent or create uncertainty and anxiety. Immigrants play a vital role at our company and support our country’s critical infrastructure. They are contributing to this country at a time when we need them most.”

According to Myvisajobs.com, America’s tech giants are among the companies relying most heavily on foreign talent. IBM, Microsoft, Google, Amazon, Apple, Intel and Facebook all filed 1,500+ Labor Condition Applications for H-1B visas in fiscal year 2019, putting them among the top H-1B visa sponsors. An LCA is filed by prospective employers of foreign workers. It is a prerequisite for the actual visa application process. The data also reveals the average salary provided in the application filings. The numbers clearly indicate that the positions to be filled by foreign workers are in fact jobs that require specialty skills, seemingly refuting Trump’s suspicion of specialty visa programs being abused to hire cheap foreign workers. 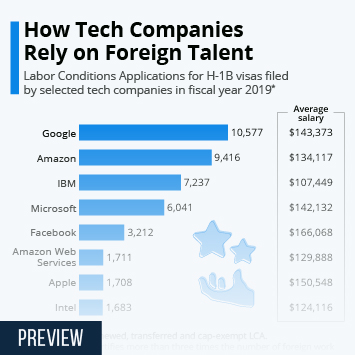 This chart shows the number of Labor Condition Applications for H-1B visas filed by selected tech companies in fiscal year 2019.