88.9k
Examples of black market activity are pretty common, whether it's a warehouse worker driving an unlicensed taxi between shifts, an electrician accepting cash payments without declaring his earnings or a simple drug deal in a shady alleyway. However, the level of black market activity, also defined as the shadow economy, depends highly on your country of residence. Generally defined as businesses and individuals engaging in inappropriate practices without complying with certain legal obligations such as paying tax or maintaining acceptable standards of employment, the shadow economy costs governments around the world trillions of dollars every year.

According to the IMF, heavily regulated economies with weaker administration tend to have well-established shadow economies. It's far smaller in natons with strong, well-regulated and efficient government institutions. Back in the late 1990s, this was readily apparent in former Soviet states like Georgia where the shadow economy was estimated at 64 percent of GDP.

Today, the shadow economy is booming across southern Europe, though the scale of underground activity can only be measured indirectly. According to a new study published by the Institute for Applied Economic Research at the University of Tübingen in Germany (IAW), Greece's shadow economy is estimated to average 21.5 percent of GDP. In the United States, undeclared cash transactions seem to be rarer with IAW's study placing U.S. shadow economic activity at 5.4 percent of the country's GDP. 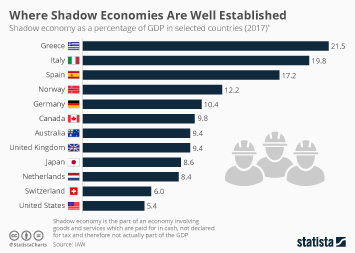 This chart shows the shadow economy as a percentage of GDP in selected countries in 2017.