88.9k
The recent diplomatic crisis in the Persian Gulf region has called into attention America's role in that part of the world. U.S. President Donald Trump sided with Saudia Arabia, who together with its neighbors, the United Arab Emirates (UAE) and Bahrain, look to isolate Qatar. Shortly before, Trump had visited Saudi Arabia, celebrating America's close ties to the Wahhabi rulers – and also hinting at big arms deals with the Saudi Kingdom.

However, the much smaller Qatar is a regional ally of the United States too. It hosts the U.S. military air base Al Udeid which is of key importance to the American military presence in the Gulf region. According to the latest Defense Manpower Data Center (DMDC) figures, around 5,200 service personnel are stationed in Qatar, compared to 650 in Saudi Arabia. Also, the Pentagon has okayed a delivery of F-15 fighter jets to Qatar, described as being worth $12 billion.

Even so, as the below chart shows, Saudi Arabia still is the biggest purchaser of U.S. arms in the region, needing constant resupplies as it is engaged in a war in Yemen. The Kingdom is the biggest and most influential power west of the Persian Gulf, and a fierce rival to Iran on the other side of the Gulf. Saudi Arabia's ally, the United Arab Emirates (UAE), is the second biggest importer of U.S. weapons in the region, according to data provide by the Stockholm International Peace Research Institute (SIPRI).

SIPRI has come up with a unique measuring system to track worldwide arms deals. The so-called trend-indicator values (TIV) are an artificial unit created to measure the volume of international transfers of major conventional weapons. This way, general trends can be identified. The figures do not represent sales prices for arms transfers. 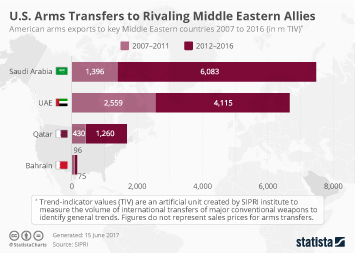