Published by Statista Research Department, Dec 1, 2020
The meat snack category includes traditional beef jerky, meat sticks, kippered steak, pickled sausage, combo packs, sliced jerky and chews. Traditional beef jerky is lean meat trimmed of fat, then cut into stripes and dehydrated and preserved with salt. The category leader is typically low in fat, carbohydrates and calories and provides a high amount of protein. But due to the preservation the product is high in sodium too.
Traditionally, meat snacks were typically carried in convenience stores, but as more and more consumers demanded healthier and leaner snacks, the more retail channels sold them. The core demographic is still primarily men aged between 18 to 30 years. In order to expand the category and to become more mainstream, major category growth drivers tend to include new exciting flavors and product marketing to a larger demographic group.

Within the meat snack category, jerky is the most popular type among Americans. In 2016, it was reported that jerky made up 42.8 percent of meat snack dollar sales in U.S. convenience stores. Oberto Jerky showed the highest growth with 378.9 percent in 2016 compared to the prior year.

In the following 4 chapters, you will quickly find the 21 most important statistics relating to "Meat Snacks". 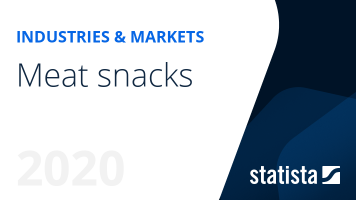 The most important key figures provide you with a compact summary of the topic of "Meat Snacks" and take you straight to the corresponding statistics.