The United Arab Emirates (UAE) is located at the southwest end of the Persian Gulf. The country is a federation of seven states. It is and has been one of the Middle East’s most important economic centers. While still conservative, the UAE is also one of the most liberal countries in the region, however, the government maintains an authoritarian, yet stable policy. The media is also strongly regulated.
The population of the UAE amounts to around 10 million, with the vast majority living in urban areas and cities. The fertility rate has decreased from 2.15 to around 1.77 children per woman over the span of a decade, while life expectancy has increased slightly. However, at present, around 85 percent of the population are between the ages of 15 and 64, with only around 1 percent of the population being aged 65 or older. The country is also known to have a large expatriate population.

The economy of the United Arab Emirates is reliant on oil, which accounts for the majority of its exports. At present, the UAE possesses one of the largest shares of the world’s oil reserves and produces around 4 million barrels of oil a day, most of which is exported to Asia and the Pacific region.

The industrial sector composes around 55 percent of total gross domestic product generated in the UAE. The UAE has become a global trade center and until recently, the country boasted quite a large trade surplus, likely due to the country’s free trade zones which have helped attract foreign investors. as of 2015, this surplus has been reduced considerably though. Due to the country’s oil wealth, GDP per capita is comparable to the average GDP per capita of Europe as a region. The economy has been impacted by lower oil and gas prices and growth has decreased somewhat in the past few years, however growth is expected to stabilize over the next few years, after a dramatic slump in 2017. While the country is making attempts to diversify its economy beyond oil, the economy is expected to remain strong for the foreseeable future.
This text provides general information. Statista assumes no liability for the information given being complete or correct. Due to varying update cycles, statistics can display more up-to-date data than referenced in the text.

Total population of the MENA countries 2021

The United Arab Emirates and the coronavirus 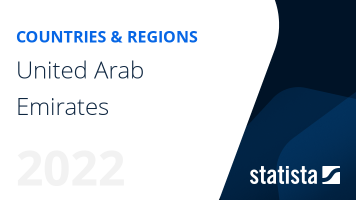 The most important key figures provide you with a compact summary of the topic of "United Arab Emirates" and take you straight to the corresponding statistics.