Published by Statista Research Department, Mar 4, 2022
A refugee is someone living outside his or her home country that is unable or unwilling to return to their home country because of a justifiable fear of persecution. Canada’s refugee system offers three pathways for resettlement of refugees from outside of Canada: government assistance, private sponsorship, and the blended visa office-referred program. All three paths offer permanent resident status.
Refugees who are eligible for government assistance are those who meet the qualifications of refugees under the 1951 Refugee Convention treaty of the United Nations and are referred by the United Nations High Commissioner for Refugees (UNHCR). They are eligible for financial assistance from the government for up to one year or until they are financially independent, whichever comes first. The level of financial aid is determined by the prevailing social assistance rates of the province where the refugees reside. In 2019, Canada admitted 9,951 government-assisted refugees.

Refugees who are eligible for private sponsorship are those who either meet the same Convention Refugee standards as government-assisted refugees or are a member of the Country of Asylum Class (which is similar criteria plus the requirement to be privately sponsored or self-sufficient). Private sponsors are expected to provide financial, lodging, and settlement assistance for the period of sponsorship, which is usually 12 months. In 2019, Canada admitted 19,143 privately sponsored refugees.

Refugees eligible for the blended visa office-referred program are referred by the UNHCR like government-assisted refugees but only receive six months of assistance from the government, after which private sponsors will provide another six months of support. In 2019, Canada admitted 993 blended visa office-referred refugees. Those who have arrived in Canada without refugee status may make a claim once they arrive. These claims are referred to the Immigration and Refugee Board of Canada (IRB) for a decision on eligibility.

As of 2021, refugees accounted for 14.74 percent of all permanent resident status holders in Canada. Before the Syrian crisis, the largest group of permanent resident refugees in Canada over the last decade had been Colombians displaced by fighting between guerrilla and paramilitary forces.

Canada also has a controversial program of detention for immigrant and refugee claimants who are either believed to be a danger to the public, a flight risk, unable to sufficiently confirm their identity, or otherwise inadmissible. In 2015, there were at least 685 refugee claimants behind bars. They spent an average of 59 days in detention and 93 percent where held on grounds of being a flight risk or being unable to sufficiently prove their identity.

In the following 5 chapters, you will quickly find the 28 most important statistics relating to "Refugees in Canada".

The most important key figures provide you with a compact summary of the topic of "Refugees in Canada" and take you straight to the corresponding statistics. 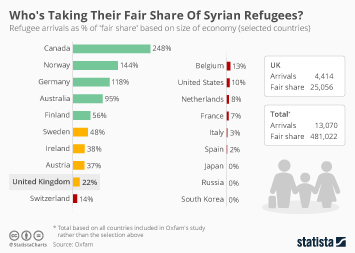