Published by
M. Garside,
Mar 30, 2022
Lithium is a silver-white colored soft metal that belongs to the alkali metal group. It is the lightest metal and the least dense solid (at room temperature) element. Highly flammable and reactive, it is usually stored in mineral oil to preserve it from corrosion and tarnish. Due to its high reactivity, lithium does not occur in its elemental form; rather, it occurs naturally as part of chemical compounds. Commercial lithium production consists of isolating lithium through electrolysis from a mixture of potassium chloride and lithium chloride. Global

Lithium reserves and production: on the rise in step with demand

The total global reserves of lithium have increased in recent years, along with an increase in lithium exploration activity. Although Chile has the world's largest lithium reserves, at 9.2 million metric tons in 2020, Australia is actually the largest producer of lithium. However, Chile is the second-largest lithium producer, and China ranks third. As of 2021, mines in several locations across Europe were in development in order to meet European demand more locally.

Lithium-ion batteries and beyond: why lithium is such a hot topic

Lithium has several uses, including perhaps its most famous use, in lithium-ion batteries. In fact, lithium-ion batteries accounted for more than seventy percent of the global lithium consumption in 2020, and its use for this application continues to grow as the race to power electric vehicles accelerates. Other uses for lithium include lubricating greases, glass and ceramics, metallurgy, nuclear fusion applications, among others. Additionally, lithium has medical applications in the form of lithium carbonate, which is used in medication for bipolar disorder as a mood stabilizer.

In the following 6 chapters, you will quickly find the 27 most important statistics relating to "Lithium".

The most important key figures provide you with a compact summary of the topic of "Lithium" and take you straight to the corresponding statistics. 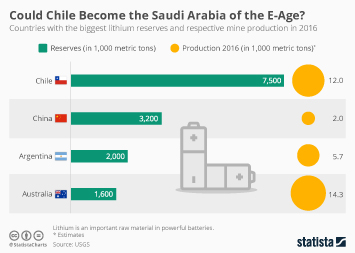 Countries with the biggest lithium reserves and respective mine production