Published by
Martin Placek,
Apr 20, 2022
Lithium-ion batteries have revolutionized our everyday lives, laying the foundations for a wireless, interconnected, and fossil-fuel-free society. Their potential is, however, yet to be reached. It is projected that between 2020 and 2030, the global demand for lithium-ion batteries will increase elevenfold, reaching over two terawatt-hours in 2030. Much of this growth can be attributed to the rising popularity of electric vehicles which predominantly rely on lithium-ion batteries for power.
Consequently, the global lithium-ion battery market is expected to significantly grow as well. While valued at about 40.5 billion U.S. dollars in 2020, the market should reach the size of around 91.9 billion U.S. dollars in 2030.

The growing demand for lithium-ion batteries is being met with an increase in production capacities. Just between 2015 and 2020, the number of battery factories under construction or planning increased from four to 181. Lithium-ion battery production capacity worldwide is thus projected to significantly increase, growing from almost 300 gigawatt-hours in 2018 to over two terawatt-hours in 2028. However, this growing manufacturing capacity is not equally distributed around the world. In 2020, China was the powerhouse of lithium-ion battery manufacturing, producing around 77 percent of batteries that entered the global market. Not surprisingly, most of the largest battery factories in the world were located in China.

In the following 6 chapters, you will quickly find the 31 most important statistics relating to "Lithium-ion battery industry worldwide".

The most important key figures provide you with a compact summary of the topic of "Lithium-ion battery industry worldwide" and take you straight to the corresponding statistics.

Chemical industry in the United States

Battery and accumulator market in the UK 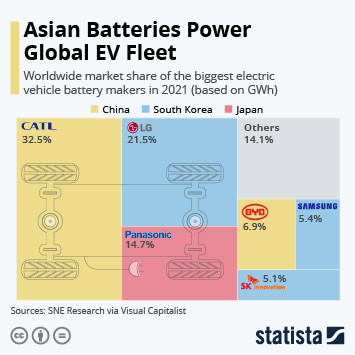 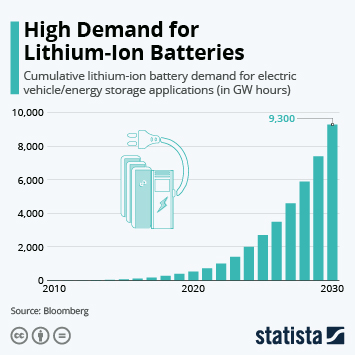