Published by
Mathilde Carlier,
Feb 23, 2022
Spurred by falling lithium-ion battery pack costs, electric vehicle sales have increased tremendously over the course of the past decade. Worldwide electric car sales are estimated to have soared to just under seven million units in 2021. The Asia-Pacific region was the leading market for battery electric vehicles, propelled by the Chinese new energy vehicle market. While Tesla is currently the world's leading maker of electric vehicles, Chinese manufacturers have hoisted themselves in the rankings in 2021. That year, six of the ten best-selling plug-in electric models worldwide were from Chinese brands.
The market potential has recently attracted the interest of big technology companies, such as Apple and Sony, which have announced the development of their own electric vehicle models.

While the electric vehicle (EV) industry has a long way to go to reach the same sales levels as the business for conventional automobiles, the new sales record would mean that the market share of electric vehicles increased from roughly 4.2 percent in 2020 to about 8.3 percent in 2021. This rapid market growth is propelled by constant innovation in electric vehicle technologies. The transportation industry was responsible for around a quarter of all green patent filings worldwide as of 2020. Tesla, the EV industry leader, filled some 3,304 patents that same year, most of them in the energy generation and storage technology area. This improvement of the industry amounts to an increase in the range of electric vehicle models in recent years. The global availability of public fast electric vehicle chargers also rose by some 43 percent in 2020, as the market starts to become more accessible to consumers.

Electric vehicle accessibility is tipped to be one of the main challenges for the industry. While the COVID-19 pandemic has led to an increase in consumer interest for the EV market, recent studies in the United States found that around four-fifths of the country’s states were not considered accessible markets for consumers interested in purchasing an EV. The United States had the second largest network of publicly available EV chargers worldwide, dwarfed only by China.

Government agencies, including the Environmental Protection Agency (EPA) in the United States, are increasingly beginning to introduce limits on nitrogen oxide and carbon dioxide emissions. Automakers are expected to be penalized if they fail to meet these limits. Despite the new regulations, standards, and goals in effect, opponents are right to criticize that the sources of electricity employed to power electric cars, as well as how materials (including cobalt, nickel, and lithium) used in car batteries are generally not taken into consideration when it comes to calculating a vehicle’s carbon footprint. On the consumer level, the regular power grid was the leading power source drivers reported intending to use to charge their EVs, in part due to its accessibility when compared to alternative power sources.

Automakers around the world will have to focus on clean fuel sources and sustainable supply chains. In 2015, Volkswagen experienced how disrespecting emerging environmental regulations may hurt brand image. The company started delivering its electric ID.3 model in 2020 and has since consistently ranked among the best-selling EV brands. By 2021, the Volkswagen Group was the fourth leading EV automaker worldwide.

In the following 4 chapters, you will quickly find the 32 most important statistics relating to "Electric vehicles worldwide".

The most important key figures provide you with a compact summary of the topic of "Electric vehicles worldwide" and take you straight to the corresponding statistics. 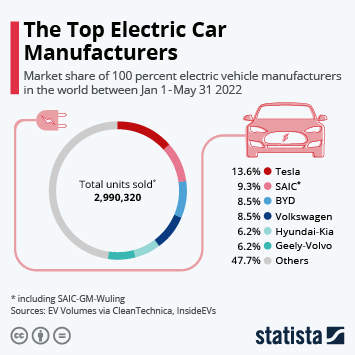 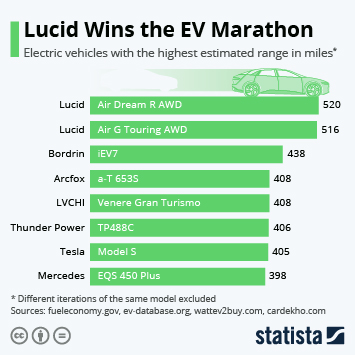 electric vehicles with the highest estimated range in miles