While numerous players were still active on the long-distance bus market after its liberalization, in recent years the dominance of the Flixbus company (previously MeinFernbus/ Flixbus) was obvious. The market share, measured by schedule kilometers offered by Flixbus, was 85 percent in 2019. The second-largest long-distance bus company at that time, BlaBlaBus, had a market share of 7.4 percent. Lastly, in the summer of 2016, Flixbus took over the European bus lines of British Megabus and the long-distance bus segment of Postbus.

A long-distance bus line is otherwise similar to local transport: during the regularly taken route from city A to city B stops at various locations take place, where passengers can disembark and board. Flixbus dominates in this field as well, with the largest number of long-distance bus lines in the country.

In the following 4 chapters, you will quickly find the 12 most important statistics relating to "Long-distance bus market in Germany".

The most important key figures provide you with a compact summary of the topic of "Long-distance bus market in Germany" and take you straight to the corresponding statistics.

Travel and tourism in Europe 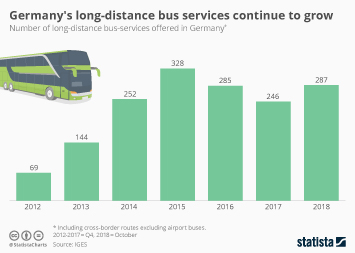