The Sanremo Music festival (in Italian: Festival della Canzone Italiana di Sanremo) is the most popular Italian song contest. It is held every year in Sanremo, a city on the Mediterranean coast in the region of Liguria, and is organized by RAI, the Italian national public broadcasting company. The peculiarity of the Festival is the fact that all of the songs performed are previously unreleased. The Eurovision Song Contest was inspired by the Sanremo Music Festival. Since its creation, it has been drawing national and international guests from various fields.
The idea of the Festival came after World War II, as a proposal to revitalize the economy of the city. It was between the 29th and 31st January 1951 that the first edition of the show was held, after an agreement between the administrator of the Sanremo Casino and the conductor of the RAI orchestra. The first edition was held at the Sanremo Casino and broadcast by one of RAI's radio stations. It wasn't until 1955 that the show appeared on television, broadcasting in Italy (always live by the TV station Rai 1), Belgium, France, Germany, the Netherlands and Switzerland. In 1977, the Festival was transferred to its current location: the Ariston Theatre. In 1987, the Milan-based company Auditel, focusing on TV audience measurement, published for the first time data about the festival's audience share.

Over the years, big names in Italian television have presented this event, with Pippo Baudo on the podium for 10 editions between 1987 and 2018. From 2007 to 2020, the TV host registering the highest audience share was Amadeus, a renowned Italian television presenter who hosted the Festival in 2020. Not all editions of the show have been the same length, but since 2015 the Festival has lasted five nights, including the opening and closing nights.

Overall, although the TV advertising revenues of the Sanremo Music Festival rose significantly from 2018 to 2020, a survey of 2020 showed that the event was not particularly popular among young people. In fact, most individuals aged between 18 and 24 years never watched the Festival during the last five years.
This text provides general information. Statista assumes no liability for the information given being complete or correct. Due to varying update cycles, statistics can display more up-to-date data than referenced in the text.
Published by Statista Research Department, Feb 20, 2020

Share of the Sanremo Music Festival's winners in Italy 2000-2019, by gender

Audience of the Sanremo Music Festival in Italy 2020, by night

Opinions on the Sanremo Music Festival in Italy 2020, by category 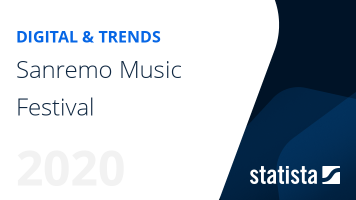 The most important key figures provide you with a compact summary of the topic of "Sanremo Music Festival" and take you straight to the corresponding statistics.