Since the creation of mobile phones, our way of communicating has changed. Mobile phones play a fundamental role in our lives, from the most basic tasks of calling to work related duties such as sharing documents and/or sending emails quickly.
Figures highlight how mobile phone usage keeps growing regardless of the location. The share of mobile phone access in households in the European Union reached 93 percent in 2015, showing how mobile phones are rapidly becoming as important as telephones.

The technological development of mobile phones has also enhanced their usage, integrating computer and tablet features. Increasingly, mobile phones are used to take photos/videos, research products and look at maps and directions. In Greece for instance, 48 percent of respondents reported to use their device for the search engine, to check social networks and watch online videos, while in Germany smartphone users reported to use their devices to check the news and tell the time.
This text provides general information. Statista assumes no liability for the information given being complete or correct. Due to varying update cycles, statistics can display more up-to-date data than referenced in the text.
Published by Statista Research Department, Aug 5, 2019 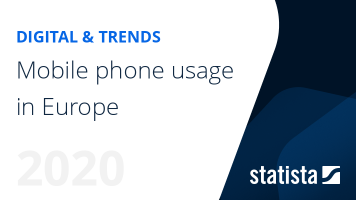 The most important key figures provide you with a compact summary of the topic of "Mobile phone usage in Europe" and take you straight to the corresponding statistics.