Published by S. O'Dea, Jun 27, 2022
Telecommunications services provide a vital thread that keeps communities connected, enabling the near-instantaneous transmission of calls and messages. It is so effortless to pick up a phone and start a video conference with partners on opposite sides of the planet that it is easy to forget the scale of operations that make such a feat possible.

Operating and maintaining telecommunications infrastructure and services is a mammoth task requiring significant expenditure. Vodafone’s capital expenditure in Europe alone reached 6.139 billion euros in 2021, showing the scale of spending required in the industry.

Keeping people connected also requires a huge number of skilled technicians and employees, which is why major telecommunications companies are such major employers. China Mobile Limited is one of the world’s largest telecommunications employers, with a workforce of around 456,239 people. Verizon provides around 118,000 jobs, while Vodafone employs approximately 94 thousand people.

Average mobile revenue per user around the world

The average revenue per user (ARPU) among mobile subscribers varies greatly around the world. In France, telecommunications companies generate a mobile ARPU of 22 U.S. dollars. In neighboring Germany, this falls to just 13 U.S. dollars. Canada stands out as one of the most expensive countries, with an ARPU of 37 U.S. dollars.

5G to set the tone in the coming years

While meeting the challenges the industry currently faces, telcos still need to look at keeping up with improving technologies and the greater data demands of customers. Going live in 2019, 5G has emerged as the next major technology that will transform how telcos provide a service. Global shipments of 5G handsets are on the rise. Companies offering affordable 5G handsets, such as Vivo and Xiaomi, have shown impressive growth in this area. Demand is expected to increase three-fold between now and 2025.

In the following 5 chapters, you will quickly find the 29 most important statistics relating to "Smartphone market in Europe". 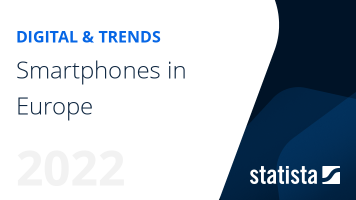 The most important key figures provide you with a compact summary of the topic of "Smartphone market in Europe" and take you straight to the corresponding statistics.