Published by
Aaron O'Neill,
Nov 22, 2021
The Kingdom of Norway is located in Northern Europe, where it borders Sweden, Finland, and Russia. It has a population of approximately 5.3 million inhabitants and is estimated to surpass 5.5 million by 2024. Norway has one of the highest life expectancies in the world, at almost 83 years. The highest number of urban inhabitants can be found in the country’s capital, Oslo, with approximately 660,000 Norwegians living there. Moreover, another 600,000 people live in the area around Oslo, meaning that more than one fifth of the country's population lives in this part of the country. A little more than 80 percent of the Norwegians live in urban areas, which is slightly less than in the Scandinavian counterparts Sweden and Denmark. The Norwegian government actively support rural areas, and tax reductions have been made available for those who choose to settle in the northernmost area, Finnmark.
Although Norway is among the founding members of the NATO, the Nordic Council and the United Nations, it is not a member state of the European Union. Nevertheless, it is still associated with the Union through a membership in the European Economic Area (EEA), since Norway is among the EU’s most important export and import partners. The Kingdom of Norway gained its independence from the union with Sweden in June 1905, but it was later that year, in October, that Sweden officially recognized the union’s dissolution. Norway is now a parliamentary constitutional monarchy that is divided into 11 administrative divisions. It is considered one of the most developed countries in the world, ranking first in the United Nation's Human Development Index, second in terms of gender equality, and fifth in the World Happiness Index.

Norway boasts a stable market economy and an ever-increasing growth rate, only broken in 2020 due to the COVID-19 pandemic. Additionally, it has a low unemployment rate. In 2020, Norway imported goods worth more than 80 billion U.S. dollars, and exported goods of roughly 85 billion U.S. dollars, leaving it with a small trade surplus. The most important import partners are Germany and Sweden, and its main export partner is the United Kingdom.

Much of Norway's economy is based on the production and export of oil and gas. In 2020, Norway exported more than 110 billion cubic meters of natural gas, making it the fourth largest exporter of gas in the world. Oil was first found on the continental shelf in the Northern Sea southwest of Norway in 1969, and the petroleum industry has since become important for the country's economy and welfare system. Most of the revenues from the petroleum sector are reinvested via the Pension Fund in order to secure welfare for future generations. Today, it is the most valuable wealth fund worldwide. However, the fall of the oil price in 2014 made it clear that the country cannot depend only on the petroleum sector in the future. Furthermore, calls are becoming louder for the Norwegian government to start phasing out oil production in the coming decades to contribute to stop climate change. On the other hand, the sale of electric vehicles has boomed in the country over the last years due to government-regulated benefits, and almost 50 percent of all new vehicles sold in Norway are battery-driven electric vehicles.

In the following 4 chapters, you will quickly find the 41 most important statistics relating to "Norway".

The most important key figures provide you with a compact summary of the topic of "Norway" and take you straight to the corresponding statistics. 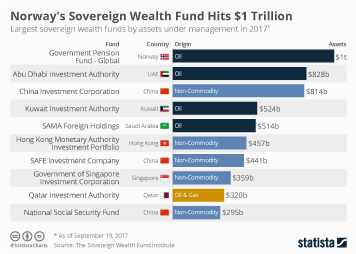