Published by
Aaron O'Neill,
Nov 24, 2022
The Republic of Finland is a country located in Northern Europe, bordering three countries: Norway, Sweden and Russia. Finland was under Swedish rule from the 12th to the 19th century, and became an autonomous grand dutchy of Russia in 1809, from which it finally gained its independence in 1917. After independence, a war broke out between the Reds and Whites over control of the country. The German-supported Whites ended up as winners, but the civil war left divisions in the Finnish society for years to come.
Nowadays, Finland is a parliamentary republic, divided into 19 administrative regions. Finnish is the official language, spoken by around 90 percent of the country’s population. Besides Finnish, Swedish also holds the status of an official language, and is spoken by roughly 5.3 percent of Finland’s inhabitants. Finland has been a member of the European Union since 1995, and has adopted the Euro as its national currency. However, Finland is not a NATO-member due to history and because of its shared border with Russia. Despite this, the country enjoys a close cooperation with the NATO.

Finland's population is about 5.5 million inhabitants. Most of these live in the southern region. Finland's capital Helsinki is also its largest city, with an estimated 657,000 inhabitants. Finland's low fertility rate means that the total population is expected to start decreasing from the mid 2020s. However, life expectancy at birth has increased steadily in the last 10 years.

Finns are addicted to coffee, and in 2020, each inhabitant drank almost eight kilos of coffee. Only the Dutch drink more coffee than the Finns. The country has a total size of 337,000 square kilometers, and 222,000 of it is covered by forest. It should not come as a surprise, then, that two of the four largest forestry and paper companies in the world are based in Finland. Lapland, the northernmost region in the country, is rumored to be the home of Santa Claus, and this is also the region with the highest number of foreign visitors.

Finland is considered as one of the best countries in the world to live in. It has one of the highest Human Development Index levels in the world, and in 2020, Finns were considered to be the happiest people worldwide. The country's Gross Domestic Product fell by almost three percent in 2020 after the outbreak of COVID-19, but is expected to grow again in 2021 and the years to follow. Despite of COVID, it boasts an employment rate of over 70 percent. The service sector accounts for almost 3/4 of the country’s workforce, whereas the industry sector only accounts for around 22 percent. Finland's most important trade partner is Germany, both in terms of export and import.

In the following 4 chapters, you will quickly find the 41 most important statistics relating to "Finland". 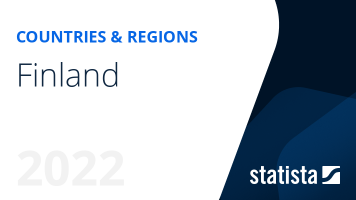 The most important key figures provide you with a compact summary of the topic of "Finland" and take you straight to the corresponding statistics. 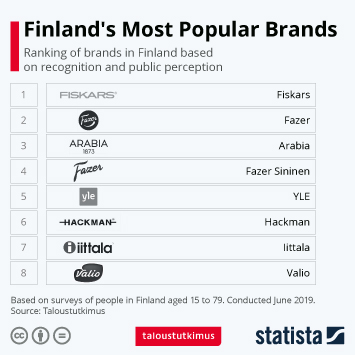 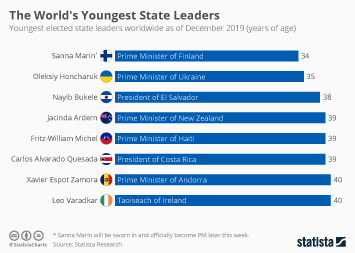