Published by
Aaron O'Neill,
Nov 24, 2021
Iceland is a small island country and one of the northernmost inhabited places on the planet. Despite its northern location, the climate is relatively mild - but definitely not warm. The summer days are long and the winter days are very short; The summer solstice is characterized by near 24 hour light and the winter solstice by near 24 hour darkness. The island also has some of the most striking and unique geography on earth: Iceland is located on the active geologic border between North American and Europe and volcanoes are active, glaciers and hot geysers abound.
Iceland is not a member of the European Union, but is connected to the central market via the European Economic Agreement (EEA). However, Iceland has been a member of NATO since its founding in 1949. The country does not have a standing army due to its low number of inhabitants and isolated geographic location, but the coast guard maintains some defensive responsibilities. Iceland was involved in the so-called cod wars with the United Kingdom over three periods of the second half of the 20th century. Disagreements over fishing rights between the two countries resulted in confrontations between the UK navy and the Icelandic coast guard, but none of them qualifies as full-scale wars. All three cod wars ended with decisions in favor of Iceland. The cod wars were brought up again in relation with disputes over fishing rights between the UK and EU-countries after Brexit.

Due to its geographic location and rough climate, the total population of Iceland is only just below 370,000 inhabitants. Almost 2/3 of the population live in the capital region in and around Reykjavik. The other cities are much smaller in comparison, and most of them are located in the south-western part of the country. Additionally, there are a number of small fishing villages located along the outer ring. Today, Iceland is one of the most urbanized nations around the world, with over 90 percent living in urban areas.

The economy was hit hard after the financial crisis of 2008, especially because of the banking collapse, but grew again until the outbreak of COVID-19 in 2020. One of the most important industries in Iceland is tourism, which was hit hard by the travel restrictions imposed during the pandemic.. The number of inbound tourists was at over two million in 2019, but it dropped to less than 500,000 in 2020. Moreover, the unemployment rate reached 6.4 percent in 2020, and was expected to be around seven percent in 2021. This is a low rate compared to other European countries, but still unusually high in Iceland. Additionally, both imports and exports fell in 2020. Iceland had a trade deficit of more than one billion U.S. dollars in 2020, but their their trade balance has been negative over the past 10 years. Norway is the most important import partner, and the Netherlands is the most important export partner.

In the following 4 chapters, you will quickly find the 34 most important statistics relating to "Iceland".

The most important key figures provide you with a compact summary of the topic of "Iceland" and take you straight to the corresponding statistics. 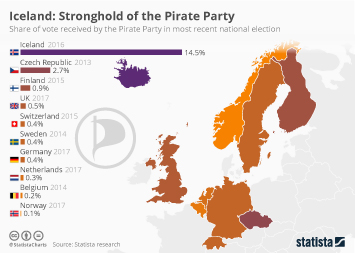 Iceland: Stronghold of the Pirate Party