In 2021, the telecommunications industry in Finland generated a revenue of roughly 3.35 billion euros. Over two billion came from mobile network operations, while the revenue from fixed network operations declined. The investment rate of fixed-line networks was the highest among all telecommunication operations, reaching 20 percent of the annual revenue. Considering the total market revenue from fixed-line, mobile and TV and radio operations in 2021, Elisa held the largest market share of 37 percent, closely followed by Telia Finland (as of 2017 part of Telia Company). The third key player in the Finnish telecommunications sector is DNA, which held 23 percent of the Finnish telecommunications market in 2021.
As of September 2021, the broadband internet penetration rate in Finnish households reached 96 percent. 40 percent of fixed internet connections in Finland fall to the speed range of 100 to 300 Mbps, while 35 percent were between 10 and 30 Mbps. In recent years, Elisa has maintained its position as the leading provider for mobile internet services and was outrun by DNA in terms of fixed broadband subscriptions. All the major mobile operators (Elisa, DNA, and Telia) only sell unlimited data plans in Finland. Instead of limiting data usage, the operators focus on selling data plans with faster maximum speeds. In 2021, almost half of all mobile data subscriptions allowed 100 to 299 Mbps connection speed. Among the Nordic countries and worldwide, Finns clearly rank first for most mobile data usage, with monthly consumption exceeding 30 gigabytes per person.

As of 2021, over 40 percent of Finnish households were watching television only via the cable or the terrestial network. According to the same survey, approximately 19 percent used IPTV (Internet Protocol Television). In 2021, there were nearly1.90 million cable TV and over 620 thousand IPTV subscriptions in the country. The number of both cable and IPTV subscriptions has constantly increased from 2011 to 2021. Meanwhile, the share of TV households with pay TV subscription has stayed between 25 and 29 percent over the past decade.
This text provides general information. Statista assumes no liability for the information given being complete or correct. Due to varying update cycles, statistics can display more up-to-date data than referenced in the text.
Published by J. Clausnitzer, Nov 29, 2022

Revenue of telecommunications operations in Finland 2011-2021, by sector

Broadband penetration in households in Finland 2021, by type

Volume of telephone calls made in Finland
3.3bn

Number of telephone calls made in Finland 2011-2021, by type of connection

Leading 10 telecom companies in the Nordics 2022, by revenue 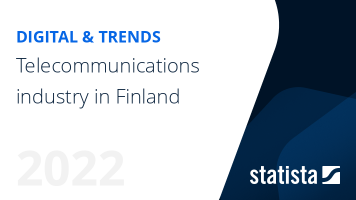 The most important key figures provide you with a compact summary of the topic of "Telecommunications industry in Finland" and take you straight to the corresponding statistics.