Published by
Erick Burgueño Salas,
Apr 19, 2022
The U.S. aviation industry is comprised of a very extensive air transportation network with some of the world’s busiest airports that serve a general aviation fleet of almost 220,000 aircraft and 348 million passengers boarded by the largest U.S. air carriers in 2020.

Workforce in the U.S. aviation sectors

Employment in the U.S. aviation industry spreads outside of air transportation and also includes manufacturers of aircraft and parts, as well as Federal Aviation Administration (FAA) workers who regulate and oversee the country's airways and aviation system. Most people involved in air transport work for the relative handful of major air carriers and only a minority is actually employed in specialized fields such as a flight engineer, technician or aircraft mechanic. In 2020, the number of pilots in the United States certified by the FAA was recorded to be at around 691,700. In the U.S., pilot certification is split into five categories: student pilot, recreational pilot, private pilot, commercial pilot, and airline transport pilot. The majority of aviation workers perform tasks unrelated to aircraft operations such as: flight services, baggage handling, fueling, food services etc.

In 2020, the average number of U.S. passenger airline full-time equivalent employees amounted to around 598,760 people. Around 96,280 of them were employed by a low-cost airline in that same year. As of December 2020, American Airlines was acknowledged to be both the leading passenger airline in the U.S. by number of full-time employees and also having the best paid pilots in the whole U.S. commercial aviation. American Airlines pilots earned an average annual salary of about 280,000 U.S. dollars as of August 29, 2016.

In the following 4 chapters, you will quickly find the 25 most important statistics relating to "Employment in the U.S. aviation industry".

The most important key figures provide you with a compact summary of the topic of "Employment in the U.S. aviation industry" and take you straight to the corresponding statistics. 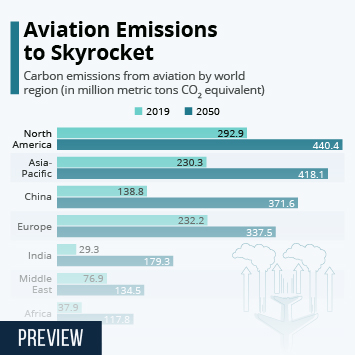