Published by
Erick Burgueño Salas,
Apr 19, 2022
American Airlines Group (AAG) is a publicly traded holding company with headquarters in Fort Worth, Texas. The company was formed following the merger of AMR Corporation and U.S. Airways Group on December 9, 2013.
The merger between the two parent companies for American Airlines and U.S. Airways has grown to operating in 55 countries with a fleet of over 1,500 aircrafts, and close to 7,000 daily departures serving almost 200 million passengers worldwide, as of June 2015. On October 17, 2015, AAG announced that it would be discontinuing the US Airways brand name.

AAG’s total assets in 2020 amounted to approximately 62 billion U.S. dollars and the company is currently staffed with 102,700 employees. In the fiscal year of 2020, AAG generated operating revenue to the tune of 17.3 billion U.S. dollars. The majority of the company’s revenue comes from its domestic sector. Among the leading U.S. airlines in 2020, American Airlines accounted for 19.3 percent of the domestic market share, followed closely by Southwest and Delta Airlines.

According to the 2020 American Customer Satisfaction Index (ACSI) score for airlines in the United States, American Airlines received a score of 74 on a 0-100 scale grade on quality of goods and services provided. It was topped by Southwest Airlines, the low-cost airline which garnered an 79-point score.

In the following 5 chapters, you will quickly find the 29 most important statistics relating to "American Airlines Group ".

The most important key figures provide you with a compact summary of the topic of "American Airlines Group " and take you straight to the corresponding statistics. 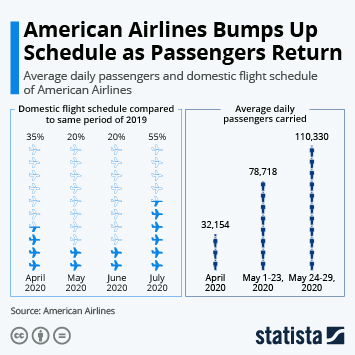