Published by
Madhumitha Jaganmohan,
Jun 21, 2022
Generally, Americans support the protection of the environment, however, a wide partisan gap has become evident in many of the issues surrounding climate change. Democrats and independents who consider themselves to lean towards the Democratic party were more likely than conservative Republicans to say that they believed in climate change and global warming. Political affiliations also seem to impact how scientific knowledge influences the public’s attitude on climate change. While Democrats who claim to have scientific knowledge believed climate change would cause a wide variety of negative environmental impacts, there was only a small variation among all Republicans, no matter their level of scientific knowledge. Political orientations in recent years seem to have a stronger influence on attitudes regarding climate change than scientific knowledge.
Since the Trump presidency has begun, climate change coverage on major broadcast news channels has increased tremendously. Broadcast news coverage of climate change increased from the previous year, largely driven by CBS. Perhaps due to a lack of scientific coverage, only a little over half of Americans stated that they believed that climate scientists had reached a consensus on whether or not climate change was occurring. Skepticism regarding the motives of climate scientists has skewed opinions of the general public, nevertheless, many still believe that scientists should play at least a minor role in making decisions about climate policies.

As climate change becomes a more pressing issue, the share of Americans who are greatly concerned about the pollution of water bodies within the country has also increased over the years. Many Americans report that they participate in activities to help the environment, especially those who consider themselves environmentally conscious. Under the Trump presidency, the United States has pulled out of the Paris agreement. However, many local governments and mayors have vowed to meet the Paris agreement goals under the Chicago Climate Charter. To reach these goals cities have dedicated a certain part of their budgets to sustainability or began conducting greenhouse gas inventories for government operations. The charter will allow mayors to develop policies and local regulations to increase climate mitigation actions. Since 2018, Greta Thunberg, a Swedish activist, has become a lead figure for school strikes for climate across the globe - known as Fridays for Future and by various other names.

In the following 6 chapters, you will quickly find the 31 most important statistics relating to "Climate Change Opinions in the U.S.".

The most important key figures provide you with a compact summary of the topic of "Climate Change Opinions in the U.S." and take you straight to the corresponding statistics.

Natural disasters in the U.S. 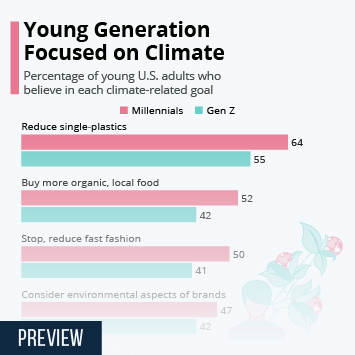 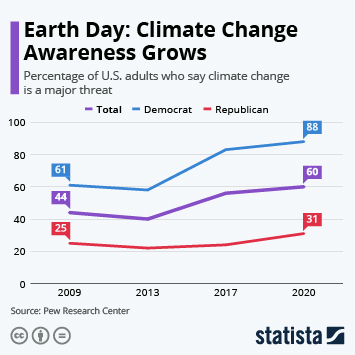