Published by
John Elflein,
Jun 21, 2022
Global climate change is predicted to negatively impact regions around the world through extreme weather events, increasing temperatures, heat waves and droughts, and rising sea levels. Such changes could potentially threaten food and water supplies, displace those in high risk areas, exacerbate existing political tensions or create new ones, and impact the world economy. Aside from these repercussions, climate change will also have great consequences for human health by increasing disease risk, creating dangerous and unsuitable living environments, and intensifying the risk of injury or death from storms and extreme weather. Three surveys from different medical societies from 2014 and 2015 found that 57 percent of surveyed physicians believed their patients’ health was already being affected by climate change through injuries due to storms. Another 45 percent felt climate change had affected their patients’ through changing heat, and 40 percent through vector-borne infections.
Climate change can propagate diseases in various ways. For example, extreme precipitation and flooding can corrupt water sources and lead to the spread of diarrheal disease and cholera. Rising temperatures can also have an influence on diseases, as they and their vectors thrive in specific climates. For instance, rising temperatures could influence the distribution of mosquitoes carrying disease, such as the Zika virus or dengue fever. Ticks will also find new habitats as temperatures increase and they will be active for longer periods, increasing the risk of tick-borne disease such as Lyme disease.

Another way that climate change can possibly impact the health of humans and animals is by releasing diseases that have remained dormant in ice. Diseases that are trapped in ice have the potential to be released as a result of rising temperatures due to climate change. Such cases have already appeared in recent years, highlighting this danger. In 2016, over twenty people were hospitalized and one boy along with over 2,000 reindeer died, after being infected with anthrax in Siberia. The anthrax was released when a heat wave melted permafrost that had frozen and trapped a reindeer carcass infected with the disease over 75 years ago. The anthrax was released into nearby water and soil, infecting other animals and eventually humans. This incidence has raised fears that other diseases could similarly be exposed through melting ice, including smallpox.

As climate change raises the intensity of weather conditions and events, those in less developed countries will be most at risk of injury and death. Between 1990 and 2015, around half of all deaths from weather-related disasters worldwide occurred in lower-middle-income countries. In the United States, flash floods and extreme heat accounted for the highest portion of deaths due to weather conditions and storms in 2016.

In the following 5 chapters, you will quickly find the 28 most important statistics relating to "Climate change and health".

Statistics on the topic
Region that is most concerned that climate change is a serious problem as of 2015
Latin America
Change in China's CO2 emissions since 1990
381.5%
Country with the highest achievement in climate protection
Denmark

The most important key figures provide you with a compact summary of the topic of "Climate change and health" and take you straight to the corresponding statistics.

Mosquito-borne diseases in the U.S.

Climate Change Opinions in the U.S. 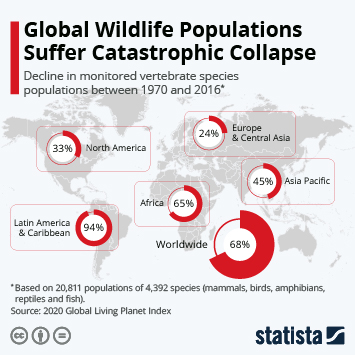 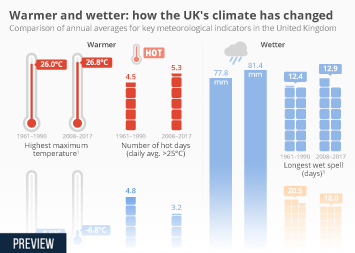 how the UK's climate has changed