The Kingdom of Eswatini, formerly known as Swaziland, is a landlocked country located in Southern Africa that has an estimated population of roughly 1.16 million people. Less a quarter of the total population lives in urban areas, the vast majority of the inhabitants are dispersed throughout the countryside. Eswatini's fertility rate has been continuously decreasing over the past years, but is still above the average rate of the world. When compared to other African countries, the nation is considered to have one of the lowest birth rates.
The Kingdom of Eswatini became a sovereign state in 1968, when it was granted independence from the United Kingdom. The nation is Africa’s last absolute monarchy, with King Mswati III ruling the country with an iron fist since 1986. This made Eswatini one of the least democratic countries in the world. In April 2018, the King changed the name of the country to Eswatini to mark the 50th anniversary of the country's independence. From a social point of view, the humanitarian crisis and human rights violations are not as drastic as in some other African countries. Nonetheless, little progress has been made to fix these issues, resulting in Eswatini having the highest percentage increase of hunger and malnutrition since 1990 . Moreover, the Swazi people face a major risk of diseases or health complications caused by HIV or AIDS, since the country has the world’s highest rate of population affected by or living with HIV. All of these factors contribute to a high death rate and a low life expectancy .

Economically speaking, Eswatini is a developing country boasting a gross national per capita GDP of roughly 3,900 U.S. dollars and a fluctuating GDP growth rate. Services account for a tad more than half of GDP generation; manufacturing represents nearly 38 percent of it, whereas the rest is produced by the agrarian sector - surprising when keeping in mind that the majority of Swazi people live in rural areas. Sugar is one of the most produced commodities and most exported by Swaziland. The country is dependent on its neighbor South Africa for a large share of its imports and exports. Since 2012, Eswatini reported a trade surplus, with the value of its exports (575682) surpassing the imports.
This text provides general information. Statista assumes no liability for the information given being complete or correct. Due to varying update cycles, statistics can display more up-to-date data than referenced in the text.

Total population of the Kingdom of Eswatini 2027

Population growth in the Kingdom of Eswatini 2021

Fertility rate of the Kingdom of Eswatini 2020

Total population of the Kingdom of Eswatini 2027

Swaziland and the coronavirus 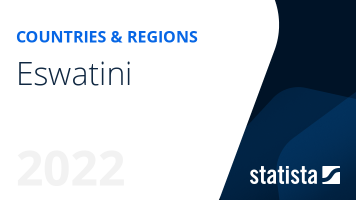 The most important key figures provide you with a compact summary of the topic of "Kingdom of Eswatini" and take you straight to the corresponding statistics.